I've always held fast to the notion that there is nothing more beautiful of a light source than the natural light and I still do. I sometimes like to at least try to prove myself wrong. The reason being is that I believe that your ideas can, and should change… At least welcome the notion of that change.

As it is true with many of my photographic ideas, some of the ideas have roots that goes way back.  I was flirting with the idea of shooting nature with electronic flash. Yes, that's sacrilegious to many including myself, till I realized that while believing in something strongly is good, holding onto something too strongly can lead to stagnation. And as we know, stagnation leads to death! Yes, Death! (repetition for dramatic effect).

So today I headed out to the woods to test out this idea. Armed with the Canon 600EX Flash, using the ST-E3-RT to trigger the flash wirelessly. I was finally able to try this technique.

Then what is the point? My goal was to use the flash to support and bring out the subject matter, nothing more.  In the first photo, the left side of the tree was lit by the setting sun, from slightly behind. And the right side of the tree was lit by the flash, also slightly behind at an angle. I tried to balance the intensity of the light. What this did was bring out the thin curving tree out from the dark background. You can see it better with the photo below. 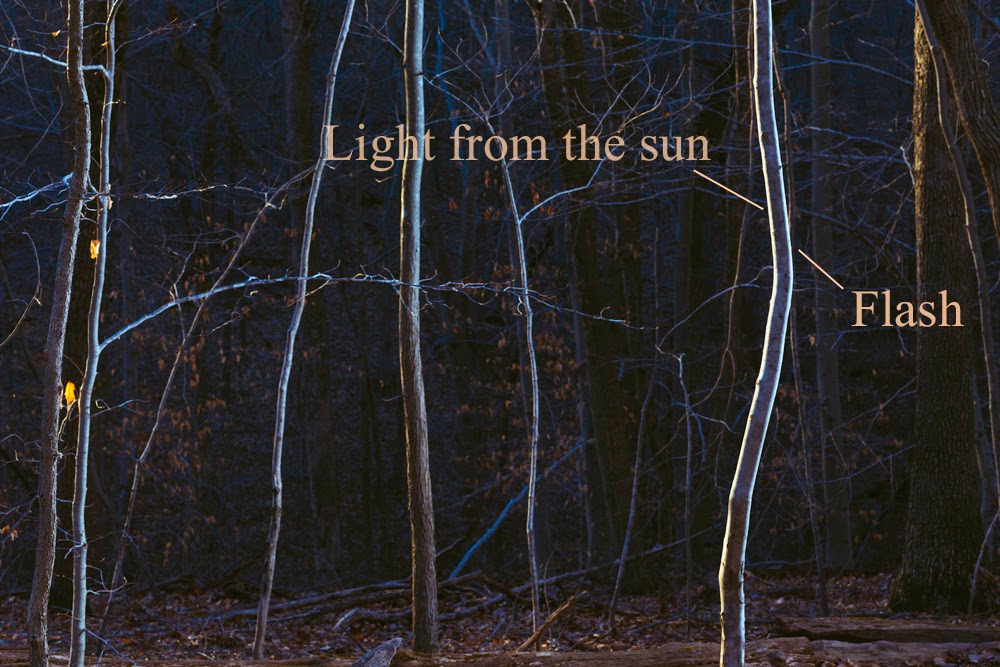 I'm way off to the side to light this tree. I almost never mount the flash on my camera to shoot. (Oh crap, sounds like stagnation setting…).

What I did was using the aperture, shutter speed, and iso to determine the exposure of the ambient light (sunlight).  I closed the aperture down to f13 to create a deeper depth of focus so I can clearly see the trees in the foreground and the background. Then I fiddled with the shutter speed (1/200th) to get the background dark, but with some texture in the shadows and enough light on the left side of the tree.  So I was mixing the ambient light with the flash in a seamless way so they will mimic each other. As I said, a partnership… Doesn't sound so fruity now does it?

Now hopefully this setting is within the capability of the 600EX flash, which it was. Then I walked off to the right side of the tree about 30 feet or so and started to test out the output using manual setting.  I know this flash does have amazing ETTL setting where it can just automatically select the output, but I being such a control freak, I opted for the manual setting. Oblique angles like this can really push the IQ limit of these digital devices.

By the way, the iso was set at 800 so it will be sensitive enough for  the flash to reach from a far distance with the relatively small aperture. The reason why I preferred some distance was that I didn't want the closer tree and the farther tree from the flash to have too much difference in brightness. The farther I step away from the subject, the difference in the intensity of the light between the farther and closer subjects in relation to the flash, becomes less.  Why did I do this? So it doesn't look too obvious like a flash, but more like the sun.

This is why the light intensity at LA and NY is roughly same even though one is closer to the sun at a given time. But if you take 3 steps toward your floor lamp, the light gets noticeably brighter on your face.  That's because the sun is so so so far away from the earth.  But you say LA is darker... Its the smog, not the distance.  Its physics. Please refer back to your high school notes.

I had my camera on a tripod. I would compose, set the exposure of the ambient light (usually underexposed about 2 stops so you can see the effect of the flash better). Then I would set the manual setting on the flash (this depends on your iso, aperture, distance, flash zoom setting, and the angle of attack…phew!) basically try it out since its digital, you can tweak all you want. The tree's not going anywhere.

Then walking off to the side, holding the flash (no stands), I point at the subject and press the "REL" button to trigger the camera and the flash. Yes, from the flash, not from the camera.  This is the best thing ever! Without this function, I would either need to drag somebody along or set the self timer and sprint back and forth. I like to run but not like this.

After this test, I realized why I haven't given this a try back in the film days. It would've been a huge pain in the butt! With this modern digital set up with high tech flash unit, I was able to preview the ambient light first, then wirelessly fire the strobe, and see if I need to adjust anything all within 5 minutes.  With film, you're pretty much going into it blind with a lot of bracketing the exposures, tripping on wires, cable releases… We have it nice now. Real nice.

Light is light. Whether photons originates from the sun or flash tubes, any kind of light can be very beautiful. For us photographers its about using and appreciating light in all forms. We may have a preference to one or the other but one is not necessarily better than the other. We can all get along.  Let there be (any kind of) light!

Popular posts from this blog

January 09, 2015
I'm starting out on a series of photographs that's very exciting for me.  It is a completely a different approach.  I was playing around with the idea few years ago but now I decided to explore it some more. Canon 5d MK3 Click to see the entire gallery I caught the flashing meteor just as it was about to crash on the earth… Just kidding. This was done with long exposure and deliberately moving the camera for the desired effect.  The meteor is just the sun. Click to see the entire gallery Yes, it does look like an impressionistic painting. I assure you that there was no photoshop filters used.  Saturation, contrast and some tinting was used to get the colors the way I like it. Click to see the entire gallery This approach is so interesting for me because even though the image looks like an abstraction, it was derived from real life.  So in a way it straddles the world of your imagination and reality.  Or better yet, it blurs the boundary between the two rea
Post a Comment
Read more

December 04, 2013
Shot for the Washingtonian Magazine for their "Before the White House" article.  It was fun visiting these homes and talking to the owners about what they know and have learned over the years. This story shows the homes of some presidents before they moved into the White House.  The presidents that I covered was Bush Sr., Kennedy, Nixon, Ford, Harding, and Johnson. John F. Kennedy 3307 N St. NE DC JF Kennedy's house Canon 5d MK3,  24mm 3.5L TSE II This House was a bit of a challenge because I did not want to show cars or street signs. Just off the the left of the shot is the street, so I didn't have too much space to work with.  From this angle I was able to keep the composition pristine as possible. Just to the right was a bunch of construction workers moving stuff around.  The wide 24mm with the perspective correction allowed me this shot from such a tight vantage point. I love this lens!  JF Kennedy's house. Back view. Canon 5d MK3,  24
Post a Comment
Read more

Dan Chung
I'm a professional photographer based out of Northern VA.