December 04, 2013
Shot for the Washingtonian Magazine for their "Before the White House" article.  It was fun visiting these homes and talking to the owners about what they know and have learned over the years. 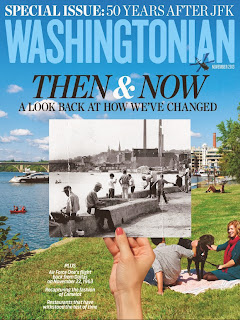 This story shows the homes of some presidents before they moved into the White House.  The presidents that I covered was Bush Sr., Kennedy, Nixon, Ford, Harding, and Johnson.

John F. Kennedy 3307 N St. NE DC
This House was a bit of a challenge because I did not want to show cars or street signs. Just off the the left of the shot is the street, so I didn't have too much space to work with.  From this angle I was able to keep the composition pristine as possible. Just to the right was a bunch of construction workers moving stuff around.  The wide 24mm with the perspective correction allowed me this shot from such a tight vantage point. I love this lens!

The owner told me that the back of the house was built first then the front was added later on.  Look at that pear tree climbing the wall.

Gerald Ford 514 Crown View Dr. Alexandria
His driveway had to be reinforced because the armored Presidential motorcade was much too heavy for the original driveway and would have sunk the car.  All of the owners were very helpful and accommodating for the story. Thank you, once again!

The book shelves you see behind President Ford is the same shelves you see on the current picture.  Despite the upgrades, the owner kept some of the original charm of the house during the era. For instance, the color of the floor is very similar to the original flooring the Ford's used to walk on. It was a pleasant surprise to the current owners that when they ripped up the flooring done by the next owners to Ford, the color was almost an exact match to the color the she had in mind.

This was the garage that was turned into a big room where the secret service lived.  All these homes had a direct land line to the White House.  Some of them also had some high tech security measures. For instance,  Lyndon Johnson's house had a flooring sensor by the stairs to alert the secret service if somebody was walking up towards the bedroom.

George H.W. Bush 5161 Palisade Lane NW DC
See those tall trees to the right side of the house? That was planted by Barbara Bush to disrupt the view of their neighbors who often complained of the many crazy parties thrown by guess who… Yep, Bush Jr.

I tried this shot with lamps off and on.  I like this better because the cool foreground and the warm background by the incandescent light offered a nice contrast of colors.

Richard Nixon 4308 Forest Lane, NW DC
I can't imagine the heating bill for this house!  I couldn't use the 24 TSE for the front of the house because for me to have composed for the house, I would need to be around where that tree is.  I wanted to include that rounded tree, so I back off and tighten the composition with the zoom.

This is the back of the house. They sure lived it up, didn't they? The back view was pretty clean, meaning there was no trees I had to shoot around.  These older neighborhoods have beautiful mature trees that is great for shading and what not, but for pictures, it limits the angle.  So what I like to do is use the trees here and there to frame the house with it.  Which is what I did below.

Lyndon B. Johnson 4921 30th Place, NW DC
Getting around trees is tricky to do. Especially when the trees are so close to the house. I got bit lucky because the tree to the left was fairly naked where you can make out the house through it.

This is a great example of how to use the tree to your advantage.  The house was very square in profile so I knew that there will be a lot of dead space to the sides.  Ha! a wonderfully lit tree! use the crap out of it! I thought to myself… I may have said it out loud.

This piano shawl was a gift from the Harding's family themselves.  Its funny when you look at the picture that you'll never know that to the left and to the right of the frame is moving boxes everywhere. The current resident was packing to move out of the house soon. Pictures are lies!

Popular posts from this blog

January 09, 2015
I'm starting out on a series of photographs that's very exciting for me.  It is a completely a different approach.  I was playing around with the idea few years ago but now I decided to explore it some more. Canon 5d MK3 Click to see the entire gallery I caught the flashing meteor just as it was about to crash on the earth… Just kidding. This was done with long exposure and deliberately moving the camera for the desired effect.  The meteor is just the sun. Click to see the entire gallery Yes, it does look like an impressionistic painting. I assure you that there was no photoshop filters used.  Saturation, contrast and some tinting was used to get the colors the way I like it. Click to see the entire gallery This approach is so interesting for me because even though the image looks like an abstraction, it was derived from real life.  So in a way it straddles the world of your imagination and reality.  Or better yet, it blurs the boundary between the two rea
Post a Comment
Read more

Dan Chung
I'm a professional photographer based out of Northern VA.